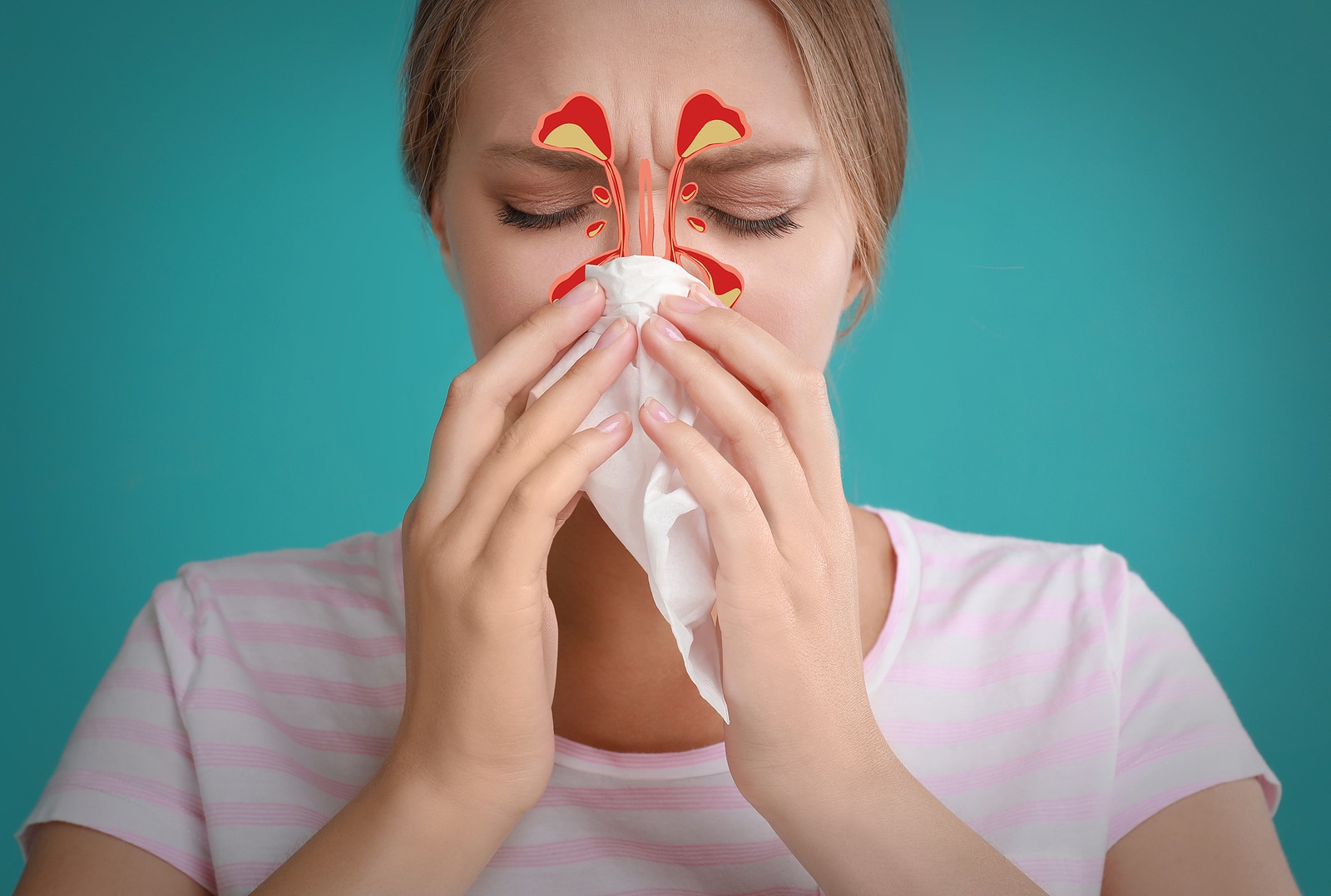 Chronic sinus issues are common and sinus conditions are a frequent cause for antibiotics to be prescribed. Usually sinus infections improve on their own without treatment. Antibiotics are only effective if the nasal infection has a bacterial origin. However most people suffering from a sinus infection are looking for some type of treatment to alleviate their symptoms and possibly decrease the amount of time they are sick. Some treatments proposed as alternatives to treat a sinus infection do not work or have little research to back them up and others have more evidence.

What is a Sinus Infection?

It is important to remember that even if you do nothing, most sinus infections will clear up within 2 weeks (about 70% clear up in this timeframe). In general it is difficult to tell if a sinus infection is bacterial or viral just based on symptoms. It is estimated that 1 out of every 7 adults experiences sinusitis each year in the United States.

Sinusitis is an inflammation of the sinuses that starts when the drainage system around the nose gets blocked. Typically this is due to a sinus infection but it can also be due to allergies. When one of the sinuses gets clogged up, typically other sinuses get backed up as well. As mucus builds up it leads to the perfect environment for bacteria to grow out of control. As the condition worsens it can lead to facial pain, headache, cough, fever, and other symptoms.

Sinusitis is categorized as either acute or chronic depending on how long symptoms persist. Typically one month or less is considered to be acute and anything that lasts longer than three months is chronic. Anything in between these ranges may be considered as “subacute.”

How Sinus Infections Are Typically Treated

Numerous over-the-counter medications are available for treating sinus infections. These include decongestants and pain relievers. However in most cases the only treatments that are recommended are things like drinking warm fluids, breathing in steamy air like from a shower, and preventing post-nasal drip from reaching the back of your throat by propping up your head with a pillow. The warm drinks and steamy air will help loosen and drain mucus buildup.

There are a few reasons why antibiotics are avoided unless they are considered necessary. Antibiotic use can increase the risk of getting an antibiotic-resistant infection in the future. When antibiotics are administered orally, they can cause upset stomach, rash, dizziness, and other symptoms. In addition they can destroy bacteria in the stomach that are essential for a healthy gastrointestinal system. This may give more harmful bacteria the opportunity to grow. Ultimately antibiotics lead to the potential for more severe illnesses and longer-lasting infections than those they are intended to treat, if they are overused.

Common treatments for sinus infections are used to alleviate symptoms, not necessarily to treat the infection. Some treatments that are available over-the-counter include:

Decongestants – These alleviate the swelling and inflammation that cause congestion. Decongestants can be either oral or topical. Phenylephrine is a common decongestant. Nasal decongestants should not be used for more than 3 days as they can result in rebound nasal congestion.

Pain relievers – Help reduce the pain caused by the buildup of pressure in the sinuses. Pain relief can help the patient get better rest and thus get better faster.

When rinsing with saline to help reduce symptoms of a sinus infection it is important to remember a few tips. You should never use tap water when administering a saline rinse – tap water may contain harmful bacteria and irritate the nose. Only use a saline rinse with distilled or boiled water. Either very hot or cold water can be uncomfortable so keep the water warm.

Typical sinus irrigation devices like neti pots have a high amount of discharge as all of the water flows back out of the nostrils. That means it must be done over a sink. With an atomizer device like the Rhino Clear Sprint, there is a discharge chamber to collect any outflow. In addition the volume is much lower meaning there is less water that needs to be collected. This makes sinus cleansing with the Rhino Clear Sprint atomizer more portable and easier to use anywhere.

Numerous alternative therapies for sinus infections have been proposed with often little evidence that has been established through clinical trials. These alternative treatments include:

Echinacea – A species of flower that is used as a dietary supplement and advertised to reduce the length of a cold or prevent colds. There is not enough evidence to say that it is effective for any indication. Side effects can include nausea and stomach pain. While generally regarded as safe, there is no evidence that echinacea can treat a sinus infection.

Capsaicin – This is the chemical in chili peppers that gives them their heat. Capsaicin is sometimes used in pain management as a topical therapy. For sinusitis there are some old studies in small groups of patients that show it may be effective. However in general local anesthesia is required to use it for sinusitis and there are no larger clinical trials to date.

Baby shampoo – Contains a variety of surfactants that are thought to disrupt the biofilm that harbors bacteria. It is thought to act like a mucolytic and a detergent that eliminates bacteria. There is some evidence that surfactants can be effective for sinusitis although they have potential to cause ciliary toxicity.

Honey – Honey is thought to have antibiofilm activity and is non-toxic. However research to-date does not show that treatment with honey is more effective than no treatment. There has been some evidence of endoscopic improvement but not symptom improvement.

Phonophoresis – This method involves ultrasound waves used to deliver a nasal medication. Evidence is growing that this is a promising treatment option for sinusitis.

Osteopathic manipulation – Physical manipulation of the body has been proposed as a treatment for sinusitis however there is limited evidence to support its effectiveness.

N-acetyl-cysteine – This amino acid is used typically to treat acetaminophen overdoses. It is sometimes used to break up mucus to treat some respiratory disorders. The clinical trial results are mixed with some showing a benefit and others showing no benefit.

Research continues to look for the best treatment for sinusitis, especially chronic sinusitis. Most sinus infections resolve independently and do not require any treatment with antibiotics. However certain treatments can help alleviate symptoms including saline rinses, decongestants, and pain relievers. Alternative treatments are generally not recommended by doctors as they have mixed results and inconclusive research – although they may work for some people.